Instead, I am talking about having an absolute best friend relationship.

This can be illustrated with the layout of the Jewish Temple.  Think of a large “courtyard.”  Many people are in that courtyard, most are not allowed into the smaller courtyard beyond because of the rules of society.

Travelling forward, we come to the porch and then into the Temple itself.  Only the most holy are allowed here.

Now we enter the rooms where only very few have ever tread.  We approach the Holy of Holies.

Then Jesus died for us, ripping the veil between the Holy of Holies and the people for all eternity.  From that moment on anyone who so chose could “come close to the Living God.”  It became your choice because Jesus defeated the rules.

It’s important to understand a “right” relationship with God.  That doesn’t mean you are perfectly perfect enough, no hint of sin anywhere, to come close.  It simply means that you are loved by the Most High God, and He wants more than anything to have a one-on-one, personal relationship with you.

However, He will not force the relationship on you.  That is YOUR choice.

But that choice is not the end.  It is not a Get Out of Hell Free card.  It begins a new relationship — or it should.

All of everything else in the spiritual realm is determined by your on-going relationship with God.

The Christian life is built on, entwined with, given life by that relationship.  The relationship is not secondary.  It is the basis for everything else.

And if it is not, you get into trouble really quickly.  You begin DOING instead of BEING in the relationship.  You start trying to earn rather than resting in God’s provision.

None of them were “good enough.”  Look at the people Jesus hung out with — tax collectors and prostitutes.  Lepers and blind beggars.

In fact, interestingly, the only recorded encounter of Jesus with someone who society deemed “good enough” that didn’t turn into an inquisition was held at night in secret with Nicodemus.  All the other elders, Pharisees, and Sadducee did was try to trap Jesus so they could discredit Him. 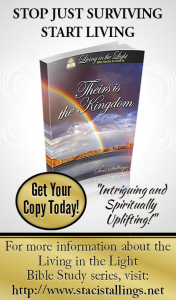 But the lowest of the lows were so humble as to have nowhere else to turn other than God, and so they approached and called out to the true Holy of Holies.  What they found was a relationship.  Jesus touched them, He heard them, He saw them, He noticed them.  He called Zacchaeus out of the tree and Peter from his fishing nets.  He didn’t look for those who thought they could do it.  He looked for those who knew they couldn’t.

Which camp are you in?

A right relationship with God is one in which you know you need God, and so you trust and rely on Him rather than trying to convince everyone of how wonderful you are.  With Jesus in the Holy of Holies, that right relationship, you can be the real you.  No mask.  No guard.  No veil.

You can tell Him of your hurts and your victories.  You can be excited, and scared, and vulnerable.

All of those signal a right relationship with God.

And from the midst of that right relationship with God, all things become possible!