Still hurting from watching her best friend marry someone else, Melody Todd has given up on dating, guys, and herself. In fact, when Blaine shows back up in her life, she does what she always does with the eligible guys who look her way—she sets him up with someone else. But Blaine soon proves to be much different than he at first seems. Too many things are not adding up the way they are supposed to, and the more Melody digs, the more she sees that the Blaine she knows is not the real Blaine at all...

Blaine sensed movement toward the door, and he ducked into the bathroom just as the door down the hall swung open. Flattening against the bathroom wall, he left the door open enough to be able to hear. A.J. plowed down the hallway with Eve right behind him. They stopped on the other side of the bathroom threshold.

“A.J., come on.  Tonight was supposed to be special.” She stopped him by grabbing his elbow and swinging him around. “Lisa and Jeff knocked themselves out to make this nice for us.  Please, please, don’t ruin it.”

The pleading in Eve’s voice was so desperate, it wafted over Blaine’s heart as well.

“Please.”  She moved toward A.J., and Blaine let his gaze fall to the darkness.  It was such a private moment between the two of them, how could he not?  “I know you think the world of Melody, and I love you for that.  I know you want to protect her, but please don’t cause a scene tonight.  Tomorrow you can call her and let her know how you feel about Bobby.”

“What? Am I supposed to just let him have a wide open shot at her tonight?”

Eve backed up from the intensity of his voice. “Maybe… Maybe, we could… I don’t know.  Do something so she doesn’t go home with Bobby, but with someone else.”

A huge whoosh of air went into Blaine’s lungs and clung there.

Eve softened.  She really was trying.  “Come on, A.J.  Blaine’s a nice guy. You should give him a chance.”

It was like forever passed before either of them spoke again. There wasn’t a fiber of Blaine that had moved, and his muscles had begun to atrophy.  Yet how could he move?  Not only would they know he had heard everything, A.J.’s already dim view of him would surely be set in concrete from then on.

The breath Eve breathed coupled with the soft kiss she put on A.J.’s cheek about did Blaine in.  A.J. Knight didn’t deserve her.  He wondered at that moment if any man did.  With that they moved on down the hall.  Long after they were gone, quietly, slowly Blaine closed the door and counted to 70 before he turned on the light.

When he did, the first thing he saw was his reflection in the mirror over the double sinks.  He wanted A.J. not to be right.  He would’ve fought it with his fists had he had the chance.  But looking into his own eyes, what did he really see?  A guy who was living a flagrant lie and flaunting a life he could only dream of living.  With a shake of his head, he dropped his gaze and gave up trying to figure it out.  There was no answer.  Not a good one anyway.  So it was better to forget it, and move on.

Another Must Read 5-stars –Farm girl

For Real is the third and final novel in the Courage Series. Staci Stallings finishes the series with a wonderful, thought provoking story that I could not put down till finished. With most novels, when I reach “The End,” I usually move on to the next book. However, with For Real, as with other Stallings’ novels, I will take a day or two (or more) to just digest it and just weigh the characters thoughts, feelings, emotions and revolations with my own life.

Melody and Blaine are characters first introduced in White Knight, the second novel in Staci’s Courage Series. I found myself pulling for them while reading White Knight. I was thrilled she continued their story, along with Jeff and Lisa’s from Protect and Serve and AJ and Eve’s from White Knight in the third and final book.

Staci creates characters and situations so true to life which I find rare in most romance novels. Melody and Blaine each find themselves struggling to deal with every day life. Melody struggles with the feelings of loneliness when her best friend AJ gets married. She struggles with her weight, finding the right college and career path, and with the desire to marry and have a family. Blaine struggles with the demands of college, working and with protecting a younger brother from an addictive mother and ex-stepfather. Both find themselves facing real hardships no matter which way they turn with no escape.

As the weight of this stress starts to get them down, they are challenged to give God their burdens. Staci weaves such great truths in the lives of these characters that every reader can walk away with understandings for their own lives. The image that Staci created when explaining how God loves us no matter what ugly surroundings we live in brought tears to my eyes.

Most novels end with the confession of love or the typical “I Do’s.” I love how Staci takes it a step further and shows how Melody and Blaine plan to work as a team and face these struggles and challenges with God at their side.

For Real is one book you will want to read over and over. I am truly sorry to see this series end but can’t wait to see what is next. You won’t want to miss the Courage Series and For Real! 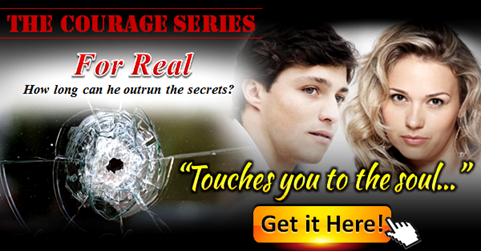