Books > A Little Piece of Heaven 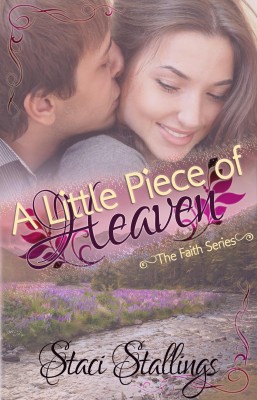 Jeremy Straton thought he had it all figured out—great apartment, live-in fiancée, soon-to-be degree, and favored son status in a well-heeled family. But when it all came crashing down, he nearly drove his friends away as well. Starting over now, his life is about to change in ways he never could have foreseen and would never have chosen on his own. Can Jeremy find “A Little Piece of Heaven” he never even knew existed?

“A Little Piece of Heaven” the sequel to “A Work in Progress.” A brand new chapter begins…

“Good grief! What is in this thing anyway?” Emily asked as she struggled to drag the box full of stereo equipment from the old apartment to the new with Jeremy pushing it from behind.

“$10,000 worth of stereo equipment.” He grunted with the effort. “State of the art. Surround sound. The best money can buy.”

On the other side she dug into the task. “Ugh. The best or the heaviest?”

He laughed although it was all he could do to keep the box moving. “You should’ve been here to get it up the elevator.”  His mind slipped back to the day he had bought it with Gwen. It was supposed to be for their apartment when they got married. It never made it that far. The memory made him push harder.

As the box slid awkwardly toward her, Emily guided and pulled as best she could. “No, thanks. Down the hall is enough for me.”  Just then the box jammed on a snag in the carpet, and she lost her grip, sending her flying backward. She landed with a thud on the carpet just as he jammed his ribcage into the box with a thwack.

“Oh,” she moaned with a little cough to get her lungs working again.

“Ow!” He rubbed his ribcage, hoping there was no permanent damage. “You okay?”

“Sure.” She pushed the pain down as she stood, readjusted her shirt, and retook her position. “Sorry.”  With both hands, she took hold of the little handle and yanked upward. It didn’t move so much as a centimeter. Again she yanked, however, the box was six times bigger than she was, and clearly she wasn’t going to get it unsnagged alone.

Jeremy had to fight the laugh because for all of her effort, yanking it upward, the box never so much as moved. “Here.” He lifted his foot and stepped around the box to take hold of it as she backed up to watch. One yank and it came free from the rug. Without letting it down, he nodded at the other side. “Go push it.”

“Right.” She lifted her foot over the edge and skirted the wall around the box to get to the other side.

On command Emily did as she was told, and they were moving again.  Her feet tried to grip the carpet, but they kept slipping out from under her. Step by sliding step they shoved the box forward. Her arms and legs were screaming for mercy at the near-impossible task of staying upright. “Ugh. You should’ve told me to wear my hiking boots.”

He glanced over the box at her. “You got hiking boots?”

“Yeah, back in Colorado!” She shoved. “They sure would come in handy right about now.”

Finally, mercifully, they made it to the door of the new apartment.

“Okay, careful through the door,” Jeremy said, angling and edging the huge box through the frame.

“Oh, man! Tell me we’re almost there.”  At the threshold she resorted to turning around and pushing it with her back.

The moment he stopped, she gave up and slid all the way down the box to the floor. “Hallelujah! Oh, man. I should have asked for hazard pay.”

“What’re you doing sitting around?” Rebecca asked as she breezed in the door with a box the size two pairs of shoes would fit into. She walked over to the counter in the kitchen and set it down with a clank.

“You’re kidding, right?” Emily was exhausted. She put her hand to her head to get it to stop swimming from the over-exertion. The thought of the fifteen other boxes of stuff not to mention some of the furniture still sitting back in the other apartment threatened to dissolve the last of her will. “You told me this wasn’t going to be hard.”

Rebecca shrugged. “It’s moving. It’s always hard.” With that she breezed back out.

“Come on.” Jeremy reached down for her hand and pulled her to her feet. “I promise, I’ll give you the light one this time.”

“Oh that you would be so kind.” Emily reached down and pulled her purple jersey shirt over her jeans where it had come up.  The high ponytail on her head swung in time with her feet as she followed him down the hall. “How in the world can two bachelors have so much stuff?  I thought bachelors like ate off of paper plates and slept on the couch.”

Jeremy glanced at her with a look of horror at the very suggestion. “I’m a bachelor. I’m not poor.”

“Oh,” she said, taking the statement to mean poor was like being a leper. Instinctively her arms twisted around her. “Well, I for one wish you were a little poorer.”

The gaze he trained on her held complete derision, but she smiled at him teasingly. “Not so much stuff to move that way.”

“Ah.” He lifted his chin in understanding although he still didn’t look very happy.

Sensing she’d just sent the train flying off the track, Emily followed him into the old apartment and planted her hands on her hips.  “Okay, gang. What’s next?” The sooner they got this done, the sooner she could get back to normal.

Staci Stallings continues her faith series with a beautiful love story that focuses on patience and understanding. The two main characters, Emily and Jeremy, were introduced in the first book of the series, A work in progress, but in this book the reader gets to know them much deeper.

Emily and Jeremy seem to be very different people, but their paths continue to cross. As they get to know each better and spend more time together, they find so many reasons why they should not be together. Jeremy is very focused on worldly items and how he can make a lot of money. Emily is much more reserved and focused on God and the values she was raised with. As the story goes, the reader also finds out what has happened in Jeremy’s and Emily’s past to shape them into the people that they are today. Both characters have real life problems that have effected who they are and how they react to situations.

What I appreciated most about this book, is that the issues the characters deal with are issues that many people deal with today. The author shows how these issues can be worked through when you trust God and focus on His love and promises.

There is a twist at the end of the book, which I did not see coming. I felt like I couldn’t read fast enough to see what would happen!

I highly recommend this book and I am looking forward to the next book in the series! 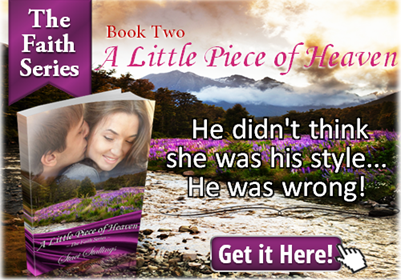