We’re in that period of life during which our activities are overtaken with running children to theirs.  One such activity of my middle child is track.  For the last three years, we have spent Saturdays in late April and early May in the park, teeming with young runners challenging themselves to see just how fast they can run.

This year, for whatever reason, our team has struggled.  We have some very good runners and some that love running although they aren’t naturally gifted with a great deal of speed.  So we’ve struggled.  When you have a team that’s struggling, one problem begins to be fatigue.  Team members begin to give up because they go into every race thinking, “We’re going to get third no matter what we do.”

Well, by Saturday, our fourth and last set of races, fatigue had set in.  With mostly fourth graders but a few third graders, we were up against teams that were bigger than us and faster than us.  By the last race of the day, I could see it on my daughter’s face.  She was frustrated and in “why even try” mode.  So I called her over.  I took her hands and said, “Close your eyes.  Now say, ‘Jesus, run this race through me.’”  She knows her mother is weird, so she did it.  But I could still see that “I don’t even care,” so I said, “Hold on.  Now, when you get ready to run, when the person is coming to give you the hand-off, I want you to close your eyes for one second and say, ‘Okay, God, show me how fast you can run.’”  She agreed.

There was another little girl on our team that I had had in Sunday School as well.  The whole day her dad was behind me and getting upset with her because he thought she was coasting. Now I know this child to be one who tries her hardest but doesn’t get a lot of recognition because she’s always going on her own power so much that her mind won’t let go and just do what she is capable of doing.  So I called her over because she was going to race too.  And I told her the same thing.  She looked at me like I was crazy, but she agreed to try it. 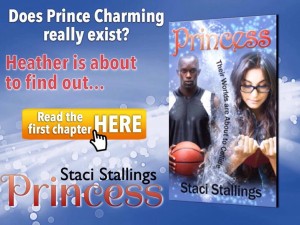 The team went out and took their positions.  The first runner was right with the pack.  The second trailed just a bit behind.  The third was my little friend.  She took off and instead of trailing like she had all day, she never lost a step with the front two runners and very nearly caught them.  Her dad behind me started yelling to begin with about going faster, etc.  Then he figured out that she really was running very fast.  When she handed off to the next runner, he said with some shock, “Wow.  She really ran that thing.”  The baton came around to my daughter, and by that point we were behind again.

She took off and gained ground with every stride.  We were cheering and going crazy.  She handed off, and the anchor runners went around.  But two of the other teams were just too strong.  We got third… again.  The white ribbon.

But then the girls came off the track.  My Sunday School friend came up to me and gave me a hug.  “I did it,” she said.  “I did.  That was fun.  I closed my eyes, and I said it, and I even stayed up with that girl!”  Then I told her, “And now you know the secret.  It’s not just about track.  When you have a test, you can say, ‘Okay, God, show me what you know.  Do this through me.’  Or when you’re serving in volleyball, you can ask God to do that through you too.”  To which she said, “Cool!”

As we started for the car, my daughter said, “Wow, Mom.  That didn’t even feel like I was running.  It felt like I was flying.”

Sometimes it doesn’t even matter what color ribbon you get; sometimes it’s the lessons you learn getting there that make all the difference.