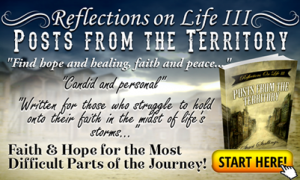 by:  Staci Stallings Have you ever thought about the word “renew”? You know what “new” means.  As in right out of the box.  Brand new.  Just purchased.  Never been used before. Great. But if it’s never been used before, how can it be a “re”?  Re — to do again. To do new…

By:  Staci Stallings So God IS love.  God exists in a relationship — Father, Son, Holy Spirit.  God created us to live in that relationship with Him.  And everything was great until Adam and Even fell for the lie that they would be gods if they just disobeyed. Thus we ended up with…

The Secret to Contentment

By:  Staci Stallings Our world is designed to make us discontent.  Think about it.  Have you ever gotten the newest, latest, coolest gadget only to find out ten days later that the 2.0 version will be out in a month?  Have you ever felt that sense of rejection… again… because you’re not in…