Have you ever thought about the word “renew”?

You know what “new” means.  As in right out of the box.  Brand new.  Just purchased.  Never been used before.

To do new again?

How about “to make new again”?

But how do you make something new again?  What does that even look like?

Well, here’s how it worked with my computer…

First, I had to admit that my old system was done-for.  In my case, that took the “blue screen of death” showing up.  In other words, nothing worked.  No mouse.  No keyboard.  Nothing. Flatline.  Over and done.

For some people, death comes before they come to a renewing of the mind (spirit/soul).  I am sincerely hoping it won’t take that long for you.

So, why did it take my computer flatlining for me to admit it was time to “renew it”?

Well, for one, I liked my old computer.  I knew where the buttons were.  It fit on my desk just so.  I had all my emails and all my programs set up on it.  I had all my files on it too.  In short, I was comfortable with it.

Plus, getting a new one represented a lot of work–work I really didn’t want to do or think I had time to do.

Apparently, God thought differently (as He almost always does).

I remember reading Marianne Williamson’s account of when she turned her life over to God, expecting God to say, “Well, we need to rearrange some things.”  Instead, according to Williamson, He took a wrecking ball to her life!

That is what “renewing” feels like.  God is not content to rearrange deck chairs while your spirit ship is going down.

And trying to save the current “computer” with that old corrupted operating system that’s riddled with shame and fear isn’t going to cut it either.

God knows this cannot be fixed.  You need a NEW ONE!

He also likes you.

He wants to spend time with you. 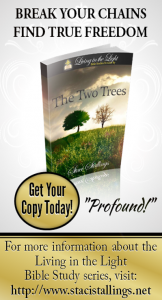 But He knows that kind of relationship just isn’t possible with that old operating system running in the background.  In fact, God knew that when Adam and Eve left the Garden (and here again is my question for eternity when I get there… did God know going in that Adam and Eve would fall?  Did He know going in what loving these two imperfect-flawed people was going to cost Him?  I suspect He did and that He chose to form them anyway.)

So when Adam and Eve chose to break the relationship with God, shame and fear came in and twisted their thinking to the point that they (we, the world) no longer could think straight.  And (forgive the language but it’s true), all hell broke loose.

We entered into a world where shame and fear corrupted everyone’s operating system from the start!  The fallen mind became the fallen world.

It’s hard to get to the point of believing we need a new operating system, but stay with me for the next installment.  You will see that all of those paragons of the Bible’s Old Testament and the New desperately needed “renewal.”  They needed to get rid of the old operating system and get a new one (and so do we!).