Well, I finally got to the part in “Forgiven Forever” (Getting Past the Guilt) that goes into the solution to our guilt.  It blew me away.

It opens with a story that I will only summarize here.

A man had a sin that he had tried to get rid of for 15 years.  He had prayed, had others pray, asked God for forgiveness, etc.  Still, this sin was eating him up.  So he went to the pastor for advice on how to get past this sin.  The pastor tells this story…

The man with the sin had a young son who was about 10 named Jeff.  Now one day the man leaves for work and he tells his son to feed the hunting dogs, but when he comes home, the hunting dogs are not fed.  So he goes to his son.  His son tells him that he didn’t get to it that morning and in the evening he forgot.  The father is upset but they go together and feed the dogs.  All seems okay until the next day.  The father comes home and there is Jeff sitting under the tree moping as his friends play in the yard.  The father says, “Jeff, what’s wrong?”

So Jeff tells him how bad he feels about not feeding the dogs.  The father says, “Well, Jeff, we all make mistakes.  It’s okay.  I forgive you.”  But a couple days later he comes home and same thing, only this time Jeff is in his room.  He goes to ask what’s wrong, and Jeff says, “Dad, I just feel so bad about not feeding those hunting dogs.  You told me to.  I knew I was supposed to, and to tell you the truth, I willfully didn’t do it that morning.  I mean I thought I would later, but then I didn’t do it later either.”

The father says, “Son, I forgave you.  You made a mistake, yes, but I forgive you.”  Couple weeks later, the same scene.  Again, Jeff just can’t let it go about not feeding the hunting dogs.  It happens again five years later at Jeff’s graduation.  “Dad, I just feel so bad about not feeding those hunting dogs.”  “Son, I forgave you for that a long time ago…”

When the son brings his wife and new baby home, the father realizes he’s sad and asks what’s wrong.  “Dad, I just feel so bad about those hunting dogs.  I mean, I know you trusted me to do it, and I really let you down…”

Now, you, like a friend of mine, may not get where this is going.  She was like, “Sheesh!  He forgave you.  LET. IT. GO!”  And then in the next breath she’s telling me how guilty she feels for sins she’s committed and how she’s just been thinking how she’s let God down and how she’s angry with God for being so judgmental by writing in the Bible, “Judge not lest ye be judged.”  Then when she judges someone else, she thinks, “Well, there I go again.  I can never get this right, God.  I can’t live up to what You want!”

She has (in the past, though I hope that’s changing), refused to give herself mercy, and so she doesn’t feel that God has forgiven her because she keeps revisiting all the awful stuff she’s done in her life rather than accepting what Christ did on the cross for her.  Like she said, “I guess I’m still trying to feed all them dead hunting dogs.”

I told her that the secret I have found is to understand those verses for what they are–telling you what works and what doesn’t.

Let’s say that you eat pizza all the time.  I mean, you eat it twice a day every day because you have no idea that pizza is not very good for you.  Now you could go on eating pizza every day not realizing what it’s doing to you physically even as you get sick and feel sluggish.  But then someone comes along and says, “Dude, pizza once in a while is not a big deal, but every day is wrecking your health.”  And you say, “Oh, really?  I didn’t know pizza wasn’t good for you.  I figured, you know it tastes good and it’s got tomato sauce and everything….”

Now once you KNOW pizza is not the healthiest choice, you then have a choice to eat something healthier or not.

It’s the same with sin.  If God never told you that lying doesn’t work, why wouldn’t you lie?  It feels better (on the surface) than telling the truth.  It might get you out of a jam you think you’re in.  It might even get you out of punishment in the temporary.  But you keep telling lies and your world will become unstable and will eventually crash around your ankles.  People will shun you because they can’t trust you.  People will probably tell others about your lying.  You may not be able to keep a job or a marriage long.  Why?  Because lying doesn’t work!

God knows that.  So He was kind enough to TELL US THAT IT DOESN’T WORK SO WE CAN AVOID IT.  But He did not tell us that so we can have a club to beat ourselves over the spiritual head with.

At Easter Sunday Mass, Father talked about us having been in chains, and Jesus by His dying and rising broke those chains so we can live “an Alleluia life”!  But the sad fact is, most of us are still in that damp, dank dungeon pressed up against the wall as if the chains are still there.  Now Jesus came down there and He took a key and He opened the locks on our chains, then He said, “Come follow Me.”

And what do we do?

We stay pressed up against the hard stone of that dungeon as though our chains were still keeping us there.

My friend said, “Yeah, but look at all these Bible verses that talk about God’s wrath toward sinners.”  I said, “You’re reading the wrong verses.  Those are good to see where the boundaries lie, but if you stay there, you’re missing the point.  You’ve got to get to that one line as Jesus hangs on the cross and looks down at us… even as He’s dying for our sins.  He doesn’t say, “Father, that’s it.  They aren’t worth it.  Send the lightning and hurricanes and tornadoes and take them all out.  They ain’t worth this.” 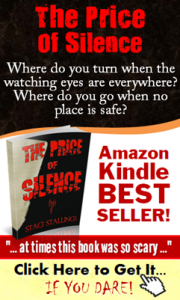 In essence He’s looking at you and me and saying, “I opened the chains.  Now come out of that dungeon and start living forgiven.”

If God is in your life, if you’ve been baptized and know what Christ did on that cross for you, then it’s your choice and only your choice that is keeping you in that dungeon.  It’s your choice to choose death over the glorious, abundant life God has purchased for you with His own blood.

Will you get it right every time?  No. Will you make mistakes and “forget to feed the hunting dogs”?  Yes.  You will.  Because you’re human.

But the Good News is… God already knows that!  He knows you’re going to mess up.  He knows there are going to be times, even though He told you not to judge or not to lie, that you are going to do so anyway.  That’s why He’s already answered that problem with a Divine and everlasting solution!

Question is:  Are you accepting what He’s already done for you?  Are you living an Alleluia life?

Are you living forgiven?