I will be the first to admit I am not a good cook.  You can ask my husband and my kids.  They would agree with me.  Truth is, I can mess up TOAST!

So you’ll understand why my middle daughter strikes fear into her mother’s heart.

Well, she’s a bit like her great grandmother, though she probably doesn’t know that.  You see, I remember my grandmother.  If she didn’t have something she needed, she would make do with something else.  When she sewed, she didn’t tend to many details like clipping corners and other such time-consuming issues.  If she was going to sew, she was going to sew.  (I’m a lot like her in that respect.)

And she wasn’t terribly afraid of trying things.  If something was to be done, she did it or figured out a way around whatever obstacle showed up.

Now my middle daughter is just like this with cooking.  She thinks of some fun thing to cook, and she wants to try it.  For my part, I try to talk her out of it, put it off hoping she’ll forget (she never does!), or conveniently “forget” to get the ingredients.

Thus our story begins back on October 8.  That was the day of our school’s Halloween Carnival.  For decorations, they got pumpkins.  LOTS of them!  And at the end of the Carnival, they were giving them away and begging people to take them.  So each of my three kids got one and my husband got one.  Then my youngest had the “brilliant” idea that along with jack-o-lanterns, we could make a REAL pumpkin pie!  So they got three more!

I see you snickering over there, but just wait, it gets better.

All seven pumpkins relocated to my kitchen floor.  Now these weren’t little pie pumpkins, they were the BIG, GIANT things you can carve more easily.  And the begging started, “Mom, can we make the pumpkin pie NOW?”

Okay.  The only pumpkin pie I’ve ever made came out of a can, and three years ago, I even abandoned that as too much work and started buying the thing frozen.  So I was decidedly NOT excited about making a pumpkin pie from a real pumpkin.

First of all, I didn’t know how to get the pumpkin out of the pumpkin.  Second of all, it sounded hard.  Third of all, was it really worth that much effort?  You get the picture.

Well, finally one Sunday the inevitable happened.  My daughter decided that she was going to make this pumpkin pie with or without me.  She downloaded very detailed instructions from the Internet and set to work.  She decided that steaming it made the most sense, so she selected a pumpkin and got started.  Within twenty minutes she had summoned the help of little brother, father, and me.  She pulled out every pan I had and had pumpkin strung from one end of the kitchen to the other. (And it’s as bad as canning corn!  Stringy and sticky! What a MESS!)

The good news is, she did eventually finish her pumpkin pie.  The bad news is, it literally took 7 and 1/2 hours.  No wonder our ancestors were so thin!

So, why am I telling you this great saga other than to whine?  Well, there is a point you’re going to like so stay with me.

Remember we’ve been talking about how to change, and it requiring three things:  #1 Start where you are #2 Use what you have #3 Maximize your state.

Well, there is more to the pumpkin story, and I think it illustrates these points perfectly.

You see, after that first pumpkin pie was made, it was so good, she decided to do another.  That’s when I called my mom and found out a better way to cook a pumpkin than steaming the thing.  You cut the top but leave it on, put it in the oven at 450 degrees for about one and one-half hours.  It will burn the outside which will then just peel right off!

Now I didn’t know this when the great pumpkin saga started on that Sunday.  I had never thought to ask.  The first time we started where we were with what we had–tools and knowledge.  We made some mistakes and then, afterward, sought advice on how to do it better.

The second pumpkin was far easier.  The third easier still because we learned not to put the chunks of pumpkin into the blender–rather mash them first and then put them in the blender to puree.

We will do our fifth pumpkin tonight (we’re freezing them as we go), and I dare say we’ve almost become pumpkin experts!

But had I required myself to know what I know now before I ever started, I would never have done the first one.

So, what are you wanting to learn to do or trying to learn that you need to take the leap and just do?  Doing is also called practice, you know.  And if you practice enough, you just might find yourself a “pumpkin” expert too! 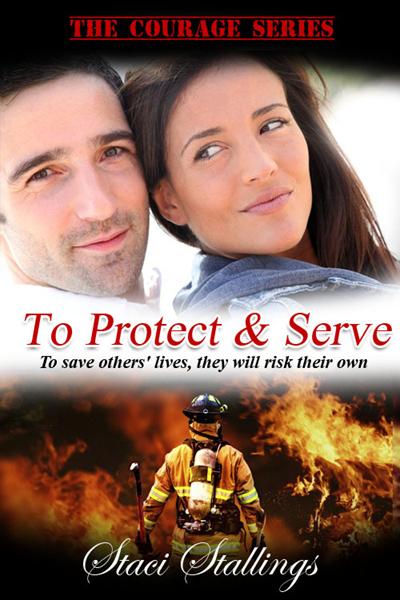 Houston firefighter, Jeff Taylor is a fireman’s fireman. No situation is too dangerous to keep him sidelined if lives are on the line. However, when control freak Lisa Matheson falls for him, she quickly realizes she can’t control Jeff or the death wish he seems to have…

To save others’ lives, they will risk their own

Buy it on Amazon Kindle

Buy it on Barnes & Noble Nook

“To Protect and Serve will hold you prisoner to its pages until the final one is turned. Prepare to cry, laugh, wish, love and maybe even cry again as you become enveloped in the hopes and feelings of Lisa and Jeff.”

Get Your Copy Today!