Winter is not my favorite time of year.  Let’s just get that out there straight away.  I don’t like to be cold, and I’m cold a lot.  Winter makes that worse because it’s cold outside, and the floors get cold, and keeping the house warm can sometimes be a challenge when Northerns decide to blow in.

But I learned something interesting about winter the other day from my son.  Being the inquisitive, energetic little kid he is, Christmas break was just impossible to handle without doing something!  So he came in here and wanted to know if he could go mow the grass.

I know what you’re thinking.  Trust me. I know. I have weird kids.

In minutes he was back.  “But, Mom.  It’s looks terrible.”  And the face he makes with terrible is just priceless.

“But it looks terrible.“  (Other than it being yellow and covered with leaves, it really doesn’t look that bad!)

I think he waited about five minutes.

Now if Dennis was still here, he would have hired the kid, flown him to Iowa, and put him right to work.  More than that, he would never have believed that anybody liked to mow so much that they would want to go out in the winter to do so!

However, I could see that my son was not going to let this go without a very good reason.  So I told him…

“Look, the grass is sleeping right now.  It’s hibernating.  If you go out there now and whack the heads off the grass, it will really hurt it.”

“Why?  What’s different about now?”

“Well, you see, grass is kind of like us.  In the summertime when it’s growing, it’s working on growing, and so to trim some off the top just tells it to grow some more.  But right now, it’s sleeping.  If it’s sleeping, it’s resting, and it needs its rest.  If you chop it off, you’re going to tell it that it’s time to grow, not to sleep, and that will make it really tired because it needs this time to rest.”

“Oh.”  Apparently that satisfied him because he didn’t ask about mowing the lawn again.

The cool thing is, I never really thought about it like that.  We are kind of like the grass although we fight it something fierce.  As it says in Ecclesiastes, there is a time for everything.  A time to grow and a time to sleep.  A time to cut and a time to let it lay fallow.  A time to run and a time to rest.  Okay.  That’s a paraphrase, but the concept holds. 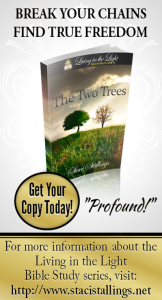 I think too often we’ve got the growing, cutting, and running thing down.  We run and we do and we work and we run some more.  What we don’t have as good of a handle on is the resting part of that equation.  Look at the sleep studies they’ve done.  We are stressed out because we’re trying to have spring and summer growth time all the time.  Morning, noon, night, 3 AM. 24/7, 365 days a year, and Leap Year is just a good day for catching up.

So schedule some “wintertime” in your day.  A block of time to just breathe and be and relax and rest.

If God designed that time for the grass, don’t you think He planned as much for us as well?