Eve Knox understands what it's like to have life ripped away in an instant. After the death of her first and only love in an unimaginable tragedy, she is struggling to go on with a life that seems to have been stripped of its former meaning. Hurting and alone, Eve knows her friends are just trying to help her cope, but their attempts to fill the void in her heart are starting to smother the spirit she once had. She sees no point in searching for love a second time, what happens when a second-chance love shows up in a way she never saw coming...

“Oh, and if you find popcorn over by the couch,” A.J. said as Eve retrieved her small jacket from the closet and slipped into it, “That was Eve’s fault.”

“Ah,” she said as if she had been wounded. “That wasn’t very nice.” She took a swing and caught his shoulder with her fist. He shrugged away from the punch even as he laughed.

“Well, come back and we’ll make some more popcorn just for you,” Gabe said as he laid a hand on Ashley’s shoulder.

Eve leveled an exasperated gaze at Ashley. “He’s such a guy.”

“You act like that’s a bad thing,” A.J. said, looking at her with a smile in his eyes that rounded down into his apple-curved cheekbones.

One look at Ashley and she and Eve said, “It is!”

Good-byes flew in all directions as the last four partygoers stepped out into the cold night. At last the door closed behind them, and the light of the streetlamps guided their journey down the sidewalk.

“Drive careful, you two,” A.J. said, waving to Jeff and Lisa when they got to the end of the sidewalk and he and Eve started to turn the other direction.

“You too,” Jeff said, and then he stopped. When he looked at Eve, all playfulness was gone. “Do you want us to follow you home?”

Eve’s face scrunched in annoyance. “I’m a big girl, Jeff. I think I can get home by myself.”

“Are you sure? Because it’s really no trouble.”

Eve smiled softly. “It’s an hour out of your way. Just get your wife home and into a bathtub. I’ll be fine.”

“Okay,” Jeff said uncertainly after a long moment. He stared at them, sizing up the situation and her. “Do you want to call us when you get there?”

“I’ll be fine,” Eve said in exasperation. “It’s not like I haven’t driven by myself before.”

“Well, which direction are you headed?” A.J. asked, breaking into the conversation.

“I’m headed South. I’m going as far as Elgin. I can follow you that far if you want.”

Eve looked at Jeff for his blessing. “Happy now?”

Jeff took a moment to assess A.J. and another to decide. “Yeah, I guess that’ll work.”

“Good,” Eve said, crossing her arms over herself, “because it’s freezing out here. See you, Lis.”

“Call me,” Lisa said as Eve turned and started for the cars, but ten steps down the sidewalk she realized that A.J. wasn’t with her. In annoyance she turned just in time to see him shake Jeff’s hand and nod. On her heel she turned and stomped to her car. She wasn’t a baby. She had managed to make it through 29 whole years without Jeff’s constant protective gaze following her every move. How she had ever managed, she was sure he couldn’t quite tell.

Just then she heard the tennis shoes on the concrete behind her, and in the next heartbeat A.J. jogged up beside her.

“I’ve got ten cents that says you drive better than he does,” A.J. said.

“Ten cents? Boy, you have a lot of confidence in me.”

She glanced at him skeptically.

Eve shook her head and laughed, and as mad as she was at the whole situation, for some reason she just couldn’t be mad with him at her side. “Okay, twenty cents it is.” Without question he followed her across the street and to her car, and then it was time to say good-bye. Gratefulness poured through her as she glanced at him. “I had fun tonight.”

He shrugged. “It was a party. You were supposed to have fun.”

That apple rounded across the top of his cheek. “I thought so too.”

For a moment she stood, not really wanting to leave.

“Take care driving home,” he said and backed away from her. At the door to the little brown Honda Civic across the street he stopped. “And don’t lose me either.”

Didn’t want to put it down!  5-Stars  – Cheri Swalwell

“For some reason, I grew a real soft spot for AJ in Book I and was thrilled when I got to continue my friendship with him in Book II. He was funny and lighthearted; yet, he has such depth to him. He never wavers or changes to fit into other people’s preconceived mold for his life. He doesn’t have to – he’s the perfect blend of fun and excitement rolled together with maturity and putting others first. His favorite saying throughout the entire book went something like this, “You always have a choice. Whether you make it or you let it make itself.”

Messages about relying on God and thanking Him for the blessings in life are very subtle, but still present. Whereas the first book in the series seemed to deal a little more with fires and danger; this book, in my opinion, focused more on relationships that were being built between characters.

Very few books have captured my interest as this one did. I found that I couldn’t put it down. I devoured it in less than two days, reading every chance I could. I was sad to see that it had to end, but I was excited thinking about which friend, or couple, that Staci was going to focus on for the next book. I have two possibilities in my head and I’m curious if either one is correct. I’m still smiling, thinking about what clever ways she weaved this story.

I was thrilled to have the chance to read White Knight and definitely can say I was not disappointed.” 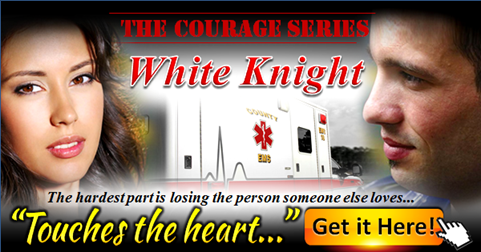