Books > The Easy Way Out

Landscape designer, Drew Easton thought he had met the perfect girl in Harmony Jordan, but then Harmony married Drew’s best friend and business partner, Aaron Foster. Trying to pick up the pieces of the failed relationship and go on with life, Drew is not prepared for the twists the road to true love is about to take. Will his heart still be in one piece at the end of this ride? Charity Jordan has one feeling about her older sister. Hate. Never able to measure up, always second-choice, Charity’s life has been driven by one bad mistake after another. When Harmony’s ex begins showing up to landscape her parent’s yard, Charity has no intentions of being his second choice either. But when feelings start to change, will she be able to keep herself from once again taking The Easy Way Out…

From the second she had awakened late at her parents’ house, the day had been one long Excedrin headache for Charity. She felt like the ugly stepsister playing nursemaid to Cinderella. Charity, do this. Hurry up, Charity, we’re going to be late to the salon. Just let her do your hair, Charity. Stop complaining. Come on, we don’t have all day. You should’ve done that last night. And they were all in on it, too—even Hart who usually took her side in the confrontations with her family.

No, today was Harmony’s day, and basically that meant that Charity was only there to get yelled at, stepped over, and complained about. When Harmony and Aaron made their way over to the three-tiered cake looking as sugary sweet as the cake itself, Charity could take no more. Without bothering to tell anyone where she was going, she pushed out of the hall and headed in the first direction her feet carried her.

October meant the skies darkened much earlier so that although it was only 8:30, Atlanta was already dark save for the amber streetlights blanketing the parking lot. Where she was going didn’t matter much. She could walk to Jamaica, and as long as nothing went wrong, no one would notice she was gone.

The worst part was that if it was just this one day, she could’ve handled that, but Harmony had always been first in their hearts, and Charity was sure she always would be. Harmony was the child who could do no wrong. She caused no trouble in high school, and once she had graduated, she had left home, gone to school, got a job, and found a man—all without so much as lifting her little finger.

Charity had heard the phrase, “Why can’t you be more like your sister?” so many times it should’ve been permanently engraved on her forehead by now. But no matter what she did, she could never be Harmony. No. Charity was the family screw-up. It was well-documented in all her school records.

Fights, cheating, lying, almost being expelled on two separate occasions, and finally dropping out when it all got too hard—that was Charity. To begin with she had tried to be like Harmony, then when it became clear that nothing she ever did would ever be good enough to justify her place in the family, she had given up even trying.

The October air was cool against her bare shoulders, but even as she looked down at her dress, a picture of Harmony in full wedding attire flashed through her mind and what she really wanted to do was rip the dress right off her body and throw it in the garbage.

“Argh!” In frustration she kicked a rock, sending it skittering across the parking lot. It was then that she saw the figure emerge from the shadows of the cars, and for one moment, fear said she should run. However, just before that message reached her feet, she realized who it was. Drew. And in a rush the annoyance with the whole lousy day returned. “What are you doing out here?”

He smiled at her sadly and slowly lifted the bottle in his hand into the light. “I’m not real big on champagne.”

Charity laughed the first real laugh she had all day. “You want some company?”

Drew shrugged and leaned back against the car before taking another drink. She walked up and leaned onto the car beside him.

“You want some?” He offered her the bottle, and she took it and tipped it up.

“Hmmm.” She closed her eyes as all the friction from the day slid away from her. “So, what are you doing out here?”

He shrugged. “I can only take being on my best behavior so long, and then I start to spontaneously-combust.”

“I hear you there. If I have to take one more picture, I might just break that guy’s camera.”

“Yeah, and this monkey-suit is about as comfortable as a grass sack.”

“Here.” She turned to him and loosened the bowtie at his neck. “No reason to be so formal out here.”

He smiled at her as she resumed her place against the car.

“Okay, so you know my story, what’s yours?” he asked off-handedly as he tipped the bottle up and took another drink.

Without asking, she reached for the bottle in his hand, tipped it up, and took a long swallow—enjoying how the liquid burned all the way down her throat and into her stomach.

“Perfection is highly overrated,” she finally said, dropping the bottle but not returning it to his hand. “Being reminded that I’m not tends to make me a little squirrelly.”

“My whole family.” She took another drink. “The fact that I’m the weak link isn’t lost on a single one of them.”

“Hey, Charity! You out here?” Hart called from the hall doors, and instantly she thrust the bottle back to Drew who quickly stowed it in his car. “Charity!”

“I’m coming!” she yelled back, waiting just long enough for Drew to find his way to her side.

“Hang in there,” Drew said softly. “One more hour, and life will go on.”

“The Easy Way Out” by Staci Stallings is the second book of the Friendship Series. It picks up where “Eternity” left off. It would be a good idea to read the books in order, but the author does a fairly good job of working enough backstory or history into the second book that it could be enjoyed on its own.

The biggest reason to read “Eternity” first is because this is the same situation seen through a second set of eyes. Brothers and sisters don’t have the same relationship with their parents because they are different people. “Eternity” shows Harmony’s relationship with her parents as being a good, supportive relationship. Her sister, Charity, sees the family as dysfunctional and unsupportive. Charity sees Harmony as the favorite daughter, and herself as a screw up, not worth loving, never getting a break, and doomed to eternal criticism no matter what she does.

The story begins as Aaron and Harmony are getting married in a big, church wedding. Drew, his former roommate, business partner and best man, steps outside for a quick nip on the bottle. He is quickly joined by Charity, Harmony’s little sister and Maid of Honor. They compare notes on marriage, and agree that it just isn’t right for either of them. Both of them think their parents made mistakes with their marriages, and afraid of making the same mistakes themselves, they have decided to avoid the whole issue.

They start to offer each other the support they aren’t getting from either of their families. That support leads to friendship, and a promise that they will never take the easy way out. Then the situation gets sticky, and it becomes a real challenge to keep that promise.

While “Eternity” was a story about good people caring about each other, “The Easy Way Out” is a story about a hero and heroine who have lots of flaws. They make poor choices, have bad habits, run away from their problems, and finally have to learn to face a challenge, accept responsibility and learn to forgive. The plot has a lot of twists and turns that keep it engaging. And while the characters aren’t perfect, the author still makes you care about them, and shows that God cares about them as well. 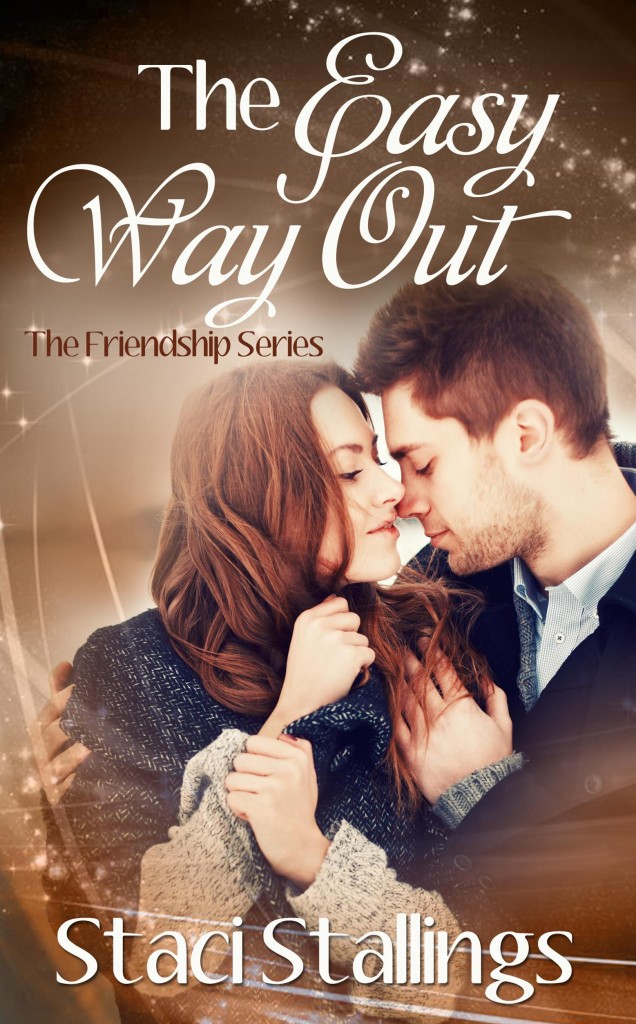