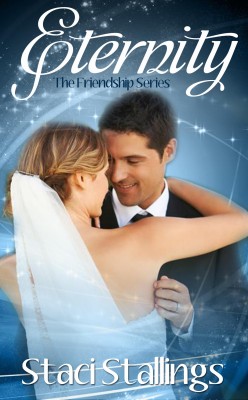 Aaron Foster thought he had the perfect life until his fiancee walked out of their apartment and then back in again with his new roommate. In desperation Aaron and his best friend, Harmony Jordan, devise The Plan, but when The Plan succeeds beyond their wildest expectation, it could spell heartache for them all.

Aaron’s heart constricted as he forced himself to close the door, slowly fitting it back into its frame. He stood there, hand on the doorknob fighting for every breath. Crying at this point seemed hopelessly stupid. It was obvious she had moved on. Curling and uncurling his fist, he stood there, knowing there was not one thing he could do to alter the situation he now found himself in.
He was trapped. When he turned and leaned on the door, his gaze fell to the phone. In a flash he had it in his hand, and in less than a second the other end was ringing.

“It’s her,” he said in utter desperation.

“On my couch. They are making out on my couch!”

“Could you give me something a little more than oh, no?”

“Okay. Of course you’re sure. Okay. Okay. Let me think. Where are you?”

“Do they know you’re home?”

Her side went silent for a moment. “The fire escape’s on your window isn’t it?”

He looked at the window in trepidation. “Yeah, but it’s only for emergencies.”

The plan was looking better and better all the time. “But where am I supposed to go? It’s 12:30 in the morning!”

Without more than a second’s pause, her voice softened. “You could come over here.”

That stopped him. In all the time he had known her, he had never been to her place, not even once. “Your place? Are you sure?”

“You’re in trouble,” she said as if stating the case for a jury. “When a friend’s in trouble, you do whatever you have to to help them out.”

She didn’t say anything for a long moment. “I think I’ll live.” Quickly she gave him the directions.

He smiled, momentarily forgetting the disaster downstairs as he wrote them down. “I’ll be there in ten minutes.”

Have you ever felt like you were invisible? Or that no one would ever like you for anything more than a friend, if even that? Then, perhaps, this is the book for you. In this book, Harmony was just such a person. She listened to her co-worker, Aaron Foster, talk about his ex-girlfriend. All the while she would have given anything to have been the one he was interested in. In an amazing series of twists and turns, Aaron talks Harmony into pretending she is interested in his roommate. When his roommate falls for Harmony, Aaron realizes that Harmony really is a girl he would like to get to know better. Is it too late for him? Read this amazing story by Staci Stallings and find out. You will be entertained and inspired. 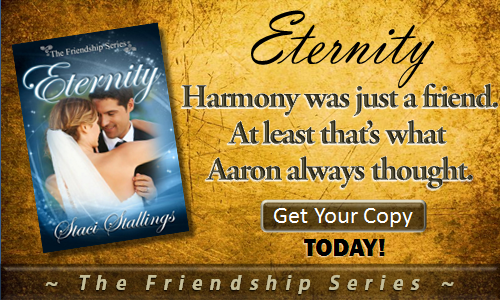