Books > A Light in the Darkness

Holly Jacobs can run from her mother's past no longer. She is unceremoniously summoned to her mother's new fiance's home in Napa Valley. The place is wonderful, but Holly can't enjoy it because she knows that just like all the others, it can't last. When her mother begins pushing Holly to make permanent plans with a young man Holly has no interest in, Holly takes off, never expecting to find a light in all of her darkness.,p. The final chapter of the Faith Series begins...

Going back was ridiculous.  Gabe had told himself that ten thousand times as he drove through the sheets coming down horizontally to the pickup.  A book was not worth this.  And yet, he hadn’t read in four days.  A new habit takes hold at seven days and is established by 21.  He knew that from every motivational book he’d ever read, and he’d read many of them.

The temptation to let it go just one more day clung to his spirit, but he wouldn’t give in to it.  Not now.  Not ever.  The vision of what he was meant to do in this life was too intense, too clear as was the opposite trail that led off into a life he had almost gotten by default.  Letting his life slide in that direction again was too sickening to think about.

At the carriage house, he killed the engine and then berated himself for that.  Stupid.  He would be right back.  But he’d already done it, so he left it off, reached for the door handle, and made a break for the huge, heavy wooden door beyond.  Unfamiliarity smacked him when his hand found the handle.  The door was open—not a lot, but it was.  There was no reason for that door to be open.  No one came out here anymore.

Shrugging the rain off his shoulders and the fear from his spirit, he ducked inside.  Dark as usual.  He reached over and pulled the little light, illuminating the stairs.  The single bulb blinked on, and he stood for a moment, looking, waiting, watching.  But nothing moved. Shoving his hands in his pockets, he started up the stairs.  Which book should he get? The one he was reading but was only marginally interested in or the new one he’d gotten from Marvin over the weekend? It was funny how even now at odd times he would receive a package from his former mentor and how those packages always had a way of turning his life at just the right moment.  It was a pattern Gabriel had learned to trust.

Then, seven steps up, he heard it, and his steps stopped instantly.  He turned to look back down the stairs.  Something wasn’t right.  It wasn’t a definite sound or even movement.  More a feeling.  His movements slid into slow motion.  Concern slipped into his spirit. “Is somebody here?”

The sound of his voice ricocheted off the rounded, stone walls around him.  His gaze darted side to side, back and forth, searching for the unseen.  The little light overhead swung, sending the shadows ducking and weaving through each other.  Foreboding slid through him. Something wasn’t right. Then he heard it, for real this time.  A small, soft intake of air.

His steps turned, and he headed back down the stairs, one at a time, slowly. Listening.  Senses taking in everything.  At the bottom, he let his hand stay on the railing one more moment.  He stopped again to listen.  It took a moment, but there it was again.  Soft, but definitely there.  “Who’s here?”

On the hard stone floor, he moved along the staircase toward the sound.  When he got to the arch of the stairs over his head, he stooped down and gazed into the shadows slicing the cobblestone under the stairs.  He squinted to see better.  Indistinct and shadowed, he saw it nonetheless.  A figure, huddling there, hiding, not moving.

Gabe’s mind raced with the possibilities.  A vagabond seeking shelter from the storm?  A criminal hiding out from the authorities?  Before he could get all the possibilities reasoned out, his eyes adjusted to the dim light.  What told him first what he was looking at—his head or his heart—he would never have been able to say for sure.  But in one giant sweep, he knew this was no vagabond.  It was a woman. Wet, crumpled, and terrified, with wide, terrified eyes looking right at him.

He truly was her angel.  5-stars –June

God puts people in our lives for many different purposes. I loved Gabriel and his using his time in the morning to pray as he pulled weeds from the flower gardens. What better place to pray than while viewing some of God’s greatest and most beautiful creations. And then when Holly started to listen to the creations, I had to chuckle. This story pulled some heart strings at the anguish that was felt over such bad choices and the worthlessness that it makes one feel. Holly was an “interesting” character in the first two books and I didn’t know how a story could possible come about from her life. I didn’t like her much at first, but after just a few pages of this story, I actually liked her and was cheering for her. Holly’s loss of so many people in her life because of her mother’s choices was sad. I enjoyed the part in the book where she talked to Luke about it and he informed her that she would always be important to him and that he wanted her to remain a part of her life if her mother did make a choice to leave him.

You can’t go wrong with reading all three books in the “Faith Series” by Staci Stallings!!! 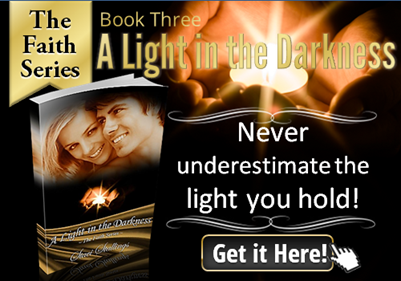